Financing geothermal energy projects usually involves tailored approaches in terms of private financec and public support schemes. Financial instruments in the geothermal sector are far from being uniform in terms of maturity and technology readiness across geographical and technological aspects. To finance geothermal projects, it requires reducing uncertainty in terms of the cost of the project. To do so, public support schemes play a key role, providing a predictable income in terms of operational aid, or lowering the need or the cost of raising capital in the case of investment aid.

Geothermal energy is competitive today. The Agence de l’environnement et de la maîtrise de l’énergie (ADEME) in France assessed the heating costs of households in France in 2019.[i] It found that geothermal heating was the lowest cost sources of heat provision compared to fossil gas and oil, which do not have a cost on their climate damages incorporated into heating prices in France, and electric boilers as highlighted in Figures below.

When it comes to district heating systems, geothermal again is very cost competitive against fossil fuel heat produced as highlighted in Figure below. Applying geothermal energy to existing district heating and cooling systems is the most optimal means of decarbonising large volumes of the existing building stock in the quickest timescale. 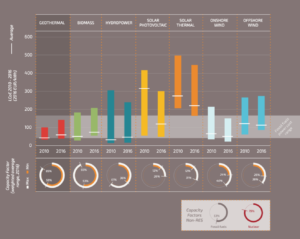 The GEORISK Project was coordinated by EGEC and funded by the European Union’s Horizon 2020 research and innovation programme, lasting for 30 months from October 2018. It aimed to develop financial schemes to mitigate the impact of the resource risk for project developers. This mitigation of the risk through financial instruments allowed for lower financial exposure of developers in case of failure to develop a geothermal reservoir.

Until the first borehole has been drilled into the geothermal reservoir, developers cannot be sure about the exact parameters (temperature and flow rate) of the planned geothermal project. Once the drilling has taken place, improved knowledge reduces the resource risk and make it possible to attract external capital. The type of financing schemes that can reduce this risk have already been established in 6 European countries.

The GEORISK project worked to establish a risk insurance covering all of Europe and in some key target third countries to cover the exploration phase and the first drilling.

Risk mitigation schemes for geothermal have been recently launched by National and Multilateral funding agencies and banks in Latin America, Mexico, Chile and Eastern Africa. These latter schemes are mainly in the form of capital grants. In some countries, however, privately issued insurance schemes are emerging.

In most of Europe, for a multiple of reasons, particularly the high exploration risk, the small size and unique nature of the market and lack of experience the private insurance sector holds back. In most cases, project developers have very little capability to manage the financial risk due to the poor knowledge of the deep subsurface, lack of technological progress and high cost. In effect, net present values of project cash flows weighted for the probability of success/failure tend to be overly negative, thus effectively shutting out private capital from investing in geothermal energy.

GEORISK project aimed to mitigate the geothermal resource risk, and worked to establish risk mitigation scheme all over Europe such as by:

EGEC, the European Geothermal Energy Council, is a non-profit international organisation founded in 1998 to promote the European geothermal industry and enable its development both in Europe and worldwide, by shaping policy, improving business condition, and driving more research and development.